In 1986, Major League Marketing became the fourth fully licensed card producer. In March, they released their debut trading card set: Sportflics. Developed by Optigraphics of Arlington, Texas, the cards used a state-of-the-art printing process called "lenticular printing." They were referred to as a "Triple Action Magic Motion®" card. Each card changes its picture three times. One headshot and two action shots of one sequence given the effect of the player either hitting or pitching. Optigraphics trademarked the idea on March 22nd, 1976. Sportflics was trademarked on December 15th, 1985. Optigraphics was owned by Ann Blake, whom later produced Score cards in 1988, and eventually start Playoff, Inc.

The 200-card set plus 133 trivia cards were touted as “Series #1” and the back of the packs told collectors to “Watch For New Series”, however, no second series ever materialized - most likely due to poor sales.

The 200-card set was made up of 139 base cards and 41 subset cards. Most of the stars of the day had five to eight cards each.

The front design (intentional or not) is very similar to the 1953 Bowman set. The back of the cards when applicable gave a relatively extended overview bio of the player along with their basic raw statistics for their career. The back of the card is also noteworthy because it lists the player's uniform number. A first in baseball card information.

Intended as innovation - it appeared to be gimmicky. Amurol Products president A.G. Atwater, the company responsible for distribution, said "Sportflics are official baseball cards but they have much greater dimension that other cards." [1] Nevertheless, The Hobby, in general, couldn't see pass that the cards were reminiscent of the Kellogg's 3-D cards (1970 - 1983) and the 1984 Seven-Eleven Coin set.

The unintended innovation came in its packaging. This was the first time that a tamper proof foil wrapper was used.

Considered to be the least produced of the four licensed MLB card products from 1986.

According to hobby lore, 50 to 100 copies of the Robin Yount's card with a Yankees logo were produced.

36 packs per box, 3 superstar cards and 2 trivia cards per pack and a offer sheet for either a Dwight Gooden or Don Mattingly one of a kind disc. (MSRP .65¢)

In a 1986 Sun Sentinel article, Keith Olbermann, then sports director at KTLA-TV, Los Angeles said "Sportflics are very nice, but they're prohibitively expensive. Dealers are charging $40 for the 200 cards compared with $16 or $17 for a full set of 792 cards from Topps. They're novelty items, and this time, they may find their niche in some collector's shoe boxes."

1986 Sportflics pricing debuted in the March 1986 Beckett Baseball Card Monthly issue at $40 for the set. In the "Owner's Box" editorial Dr. James Beckett said, "We wish them well and appreciate their innovative multi-picture, multi-player approach." 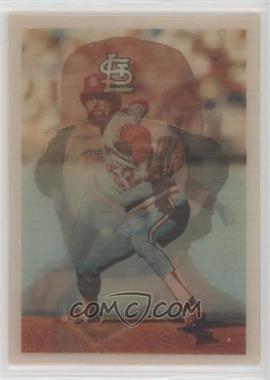 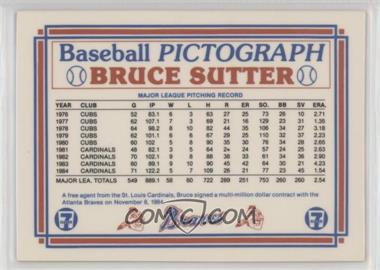 In 1985, Optigraphics produced six protoypes to show Major League Baseball and the Major League Baseball Players Association what Sportflics was proposing in order to be a new licensee for producing cards. These cards are very difficult to find and are considerably rarer than the Sample cards which were given out after the Sportflics license had been granted (see below).

Four of the cards are standard-sized, along with one mini-sized (1 5/16" by 1 5/16") Joe DiMaggio card, and one trivia card (1 3/4" by 2"). The standard-size cards resemble regular 1986 Sportflics cards, but have different photos and stats only through 1984. One of the Winfield cards has a bio only; unfortunately the biographical statements on the back are incorrect in several instances. The DiMaggio card has black and white photos on the front, and career totals on the back. The Schmidt card is dubbed a "Persograph" as it contains a list of his favorite things on the back. The trivia card is the same as those distributed with 1986 Sportflics, except it shows the Major League Baseball logo on the front. 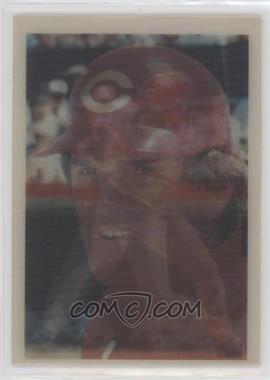 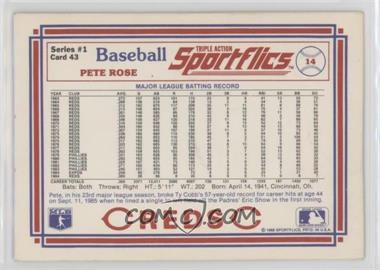 A three-card pack was distributed freely by Optigraphics salesmen to potential buyers to show them what the new Sportflics card set would look like. The set is sometimes referred to as the Vendor Sample Kit. Some of these packs even found their way to the retail counters. They are not rare although they are obviously much less common than the regular issue of Sportflics. The cards show statistics only up through 1984. The copyright date on the card backs shows 1986. 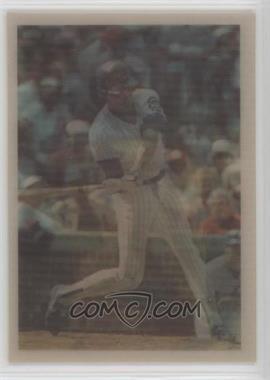 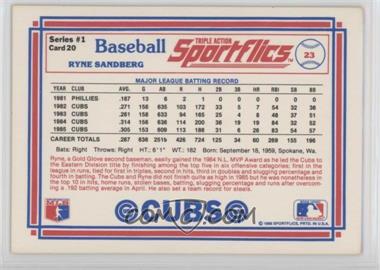 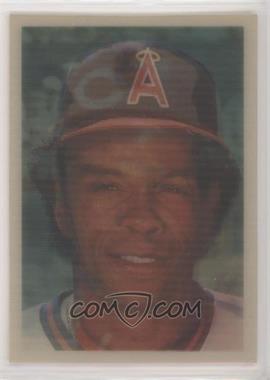 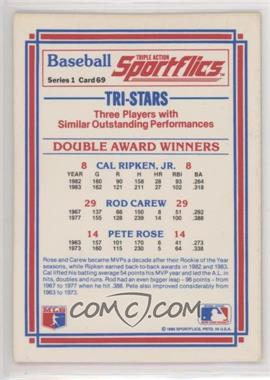 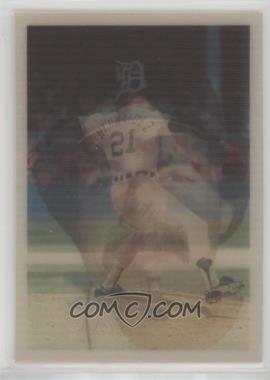 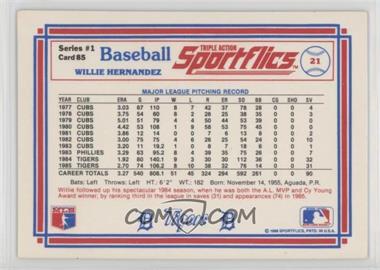 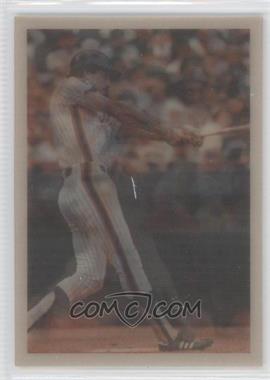 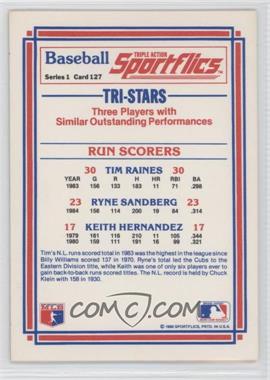 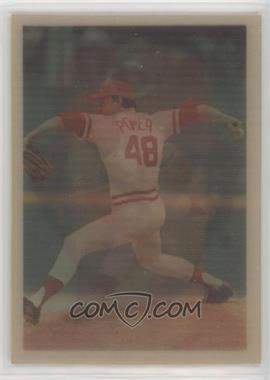 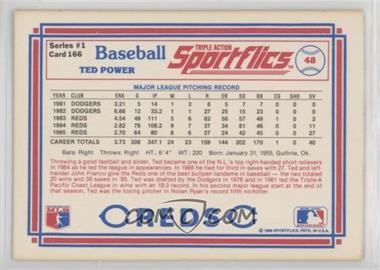 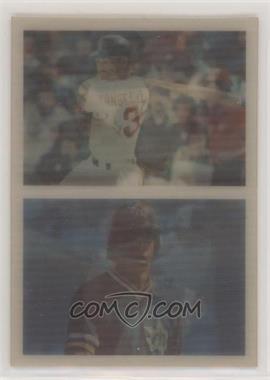 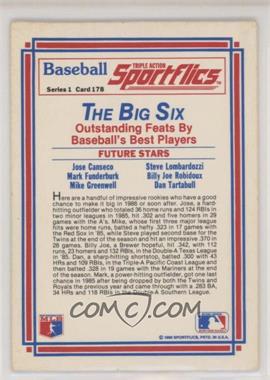 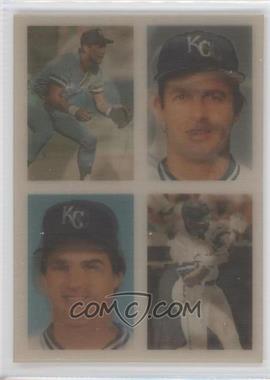 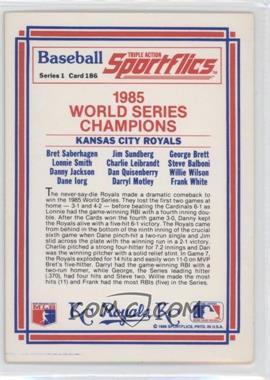 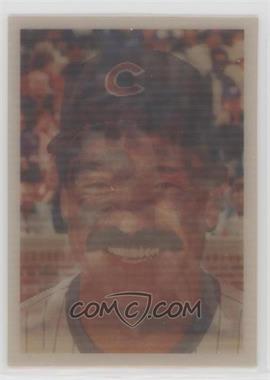 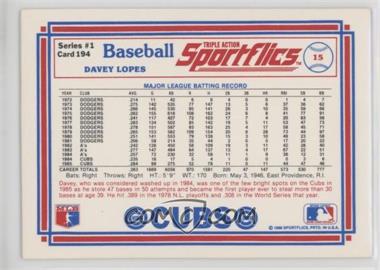 42 Robin Yount (Yankee logo on back)

178 (Jim Wilson instead of Mark Funderburk)