1998 Donruss Limited was a proposed a 200-card release limited to less than 1000 total sets and intended for release in October, 1998. The product was never released due to Pinnacle Brands' bankruptcy. Similar to the previous year's release, this set was to be broken down into four different subsets featuring either a solo or combination of players that were categorized appropriately:

Unlike other Pinnacle Brands bankruptcy issues (i.e. 1998 Select and 1998 Pinnacle Certified), none of the cards from this set have surfaced on the secondary market and it is assumed that they were never printed.

A Frank Thomas promo card (see below) along with the sell sheets are the only reminders of this product's existence.

A checklist for the base set was never released. However, the base set was supposed to feature 200 double-sided cards printed with Donruss's "exclusive Spectra-tech technology" and was to be divided into 4 subsets: Double Play, Double Team, Star Factor, and Double Vision. Additionally, each subset was to be inserted at a different rate, creating various shortprints throughout the base set. The subsets were:

100 cards featuring players with similar styles of play or position. Two different players were to be featured on one card (one front, other on the back). According to the sell sheet, the following card was confirmed for this subset:

40 cards featuring teammates that were paired together (one on front, other on the back). According to the sell sheet, the following card was confirmed for this subset:

40 cards featuring the top stars in the game on both sides. Unlike the other subsets, Star Factor cards only featured one player on both sides of the card. Less than 1,000 of each base Star Factor was to be printed. According to the sell sheet, the following players were confirmed for this subset:

20 cards featuring top rookies matched with a top veteran whom they resemble. According to the sell sheet, the following card was confirmed for this subset: 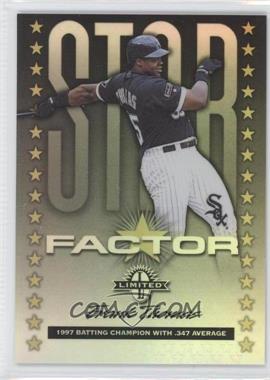 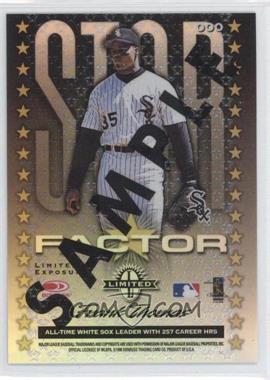 This parallel of the entire base set was to be printed on "holographic Spectra-Tech technology", which was a similar finish as the 1997 Limited Exposure cards. Each subset (Double Play, Double Team, Star Factor, and Double Vision) was supposed to have a Limited Exposure parallel that was inserted at different rates with the Star Factor subset being the rarest and limited to less than 40 copies.

A promo of Frank Thomas' Star Factor card is the only card from this product ever produced.

Fabric of the Game

Fabric of the Game was a serially-numbered insert set that was supposed to be printed on cards made of leather, wood, or nylon. This set was fractured twice, by the type of "fabric" and serial-numbered print run:

The type of fabric was based on 3 statistical categories:

The serially-numbered print run was based on 5 classification levels of career success:

As an added bonus, the first cards of each player in this set were to be die-cut to their individual jersey number. For example, the first 24 of each of Ken Griffey, Jr.'s Fabric of the Game cards would have been die-cut. According to the sell sheet, the following card was confirmed: