1998 Pinnacle Epix is a multi-tiered, multi-fractured, 72-card, cross-brand insert set. Randomly inserted in 1998 Pinnacle packs at the rate of one in 21, 1998 Score packs at 1:61 and 1998 Zenith packs at 1:11, the 24 players included in this set were featured on three different cards to commemorate (in ascending order of scarcity) their greatest play, game, season or moment. Each card was specific to a particular brand. To obtain all the cards for each player in this fractured insert set, one had to open Pinnacle, Score and Zenith packs.

A final selection of 24 Epix cards was slated for inclusion in 1998 Pinnacle Certified, but the manufacturer went bankrupt before that product shipped. However, a full set of Epix cards from the Pinnacle Certified set emerged on the secondary market nearly 20 years after Pinnacle's bankruptcy.

Each card is available in three different colors: Orange, Purple, and Emerald. Approximately 70% of all Epix are Orange, 20% Purple, and 10% Emerald. According to Pinnacle Brands, only 30 copies of each Emerald Moment card were produced although the cards are not serial-numbered.

Emerald Moment is the most rare while Orange Play is the least rare.

Printing plates for some cards also exist but it is unclear how these were distributed.

A second set of "All-Star Epix" inserts, separate from the regular Epix set, was released in packs of 1998 Score Rookie/Traded and 1998 Pinnacle Plus.

In September 1997 Pinnacle Brands distributed promo cards, available in all three colors, previewing the upcoming 1998 Epix inserts. There is no player depicted and the front merely has Pinnacle's "Icon" logo. Like the regular Epix inserts, the Orange promo is the easiest to find and the Emerald the scarcest.

The back of the promo card incorrectly states that the first series of Epix inserts would be released in October 1997. The first batch of Epix would not be released until December. 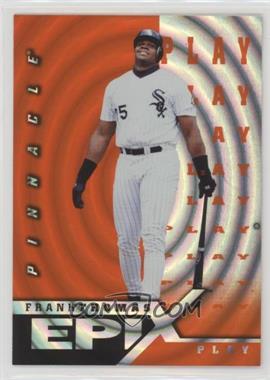 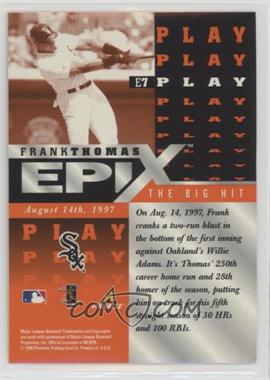 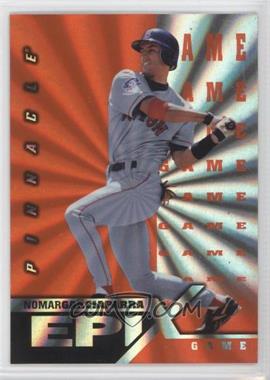 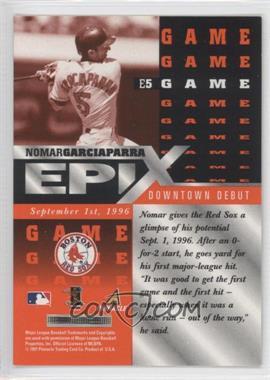 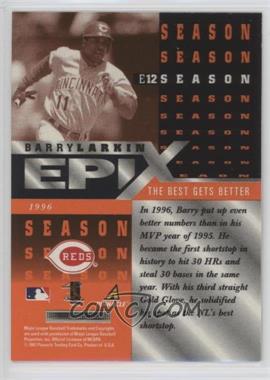 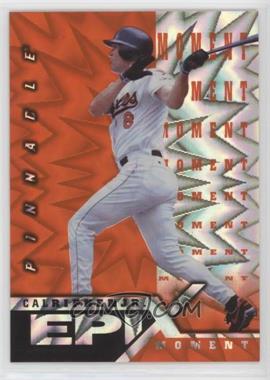 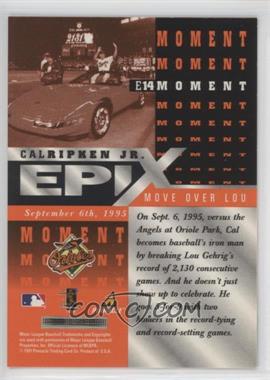 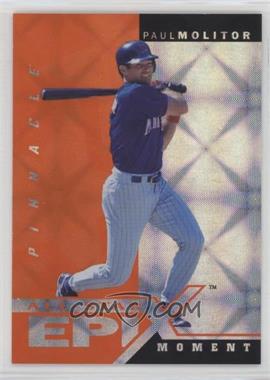 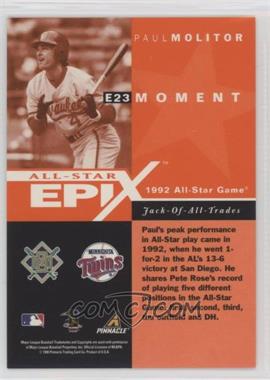 All-Star Epix is a 24-card set released in both 1998 Score Rookie/Traded and 1998 Pinnacle Plus. Similar to the regular Epix inserts, All-Star Epix showcases All-Star Game highlights on holographic matrix cards.

The first twelve cards were seeded in Score Rookie/Traded packs while the final 12 cards were inserted in Pinnacle Plus packs.

Unlike the first batch of Epix inserts, only one All-Star Epix card per player was produced.

70% of the total production of all All-Star Epix inserts were printed on Orange foil, 20% on Purple foil, and the remaining 10% on Emerald foil.