As part of the launch of the new Stadium Club brand, Topps created a collector's club of the same name. This 50-card multi-sport set was sent to "Charter Members" in the Topps Stadium Club. 32 of the 50 cards in the set are of baseball players, with the remaining 18 cards evenly divided among football and hockey -- the two other sports Topps had a license for at the time.

The cards have the same design as the 1991 Stadium Club Baseball base set, but with the words "Charter Member" printed in gold foil lettering immediately below the stripes. The back design features a newspaper-like masthead complete with a headline announcing a major event in the player's season with copy below providing more information about the event. The cards are unnumbered and arranged below alphabetically within sports.

In addition to the 50-card set, Charter Member sets also included a baseball card-sized Nolan Ryan bronze ingot, a key chain, and a personalized membership card. Some of the early ignots were produced in a size slightly larger than 2 1/2" X 3 1/2". It is believed that very early members of the Stadium Club received this over-sized Ryan Ingot. A third version of the Ryan ingot is known to exist: this one has a 24K logo on it. It is believed that the 24K version may have been sold exclusively on the Home Shopping Network. 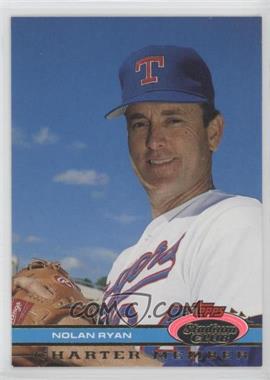 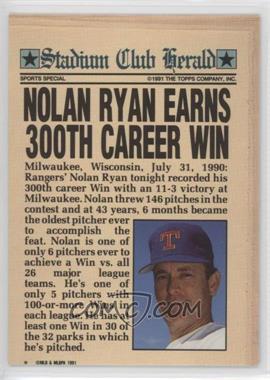 NOTE: This set is not sequentially-numbered.